I think most people have heard something about going organic in terms of what we eat – because so much of our food is processed with chemicals, pesticides, hormones, etc. The chief complaint is that it’s difficult to do on a budget because organic food is so much more expensive!  Here are some tips from my own experience on how to buy organic produce. 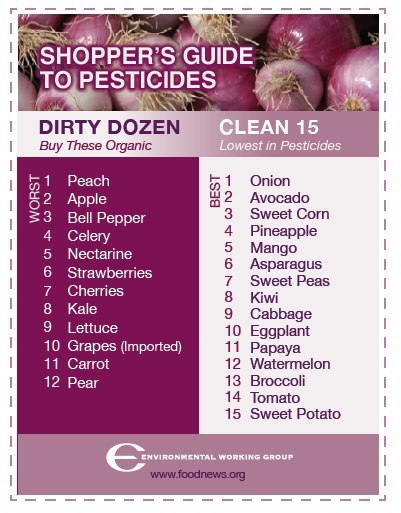 I really like the EWG guides that come out every year, because it gives you an idea of what you should buy organic (they’ve been tested to see what has the most pesticides in them). Most people will say that when you buy something with a soft skin, or berries, it’s best to go organic – because even if you wash them with really great fruit & veggie wash, the pesticides still linger.

In Edmonton, we’ve been using The Organic Box – a weekly or bi-weekly delivery of groceries (started with produce and now they include all kinds of groceries like dry goods, dairy, even frozen meat). I signed up very early soon after they started up, and have been really impressed with how honest they are about the produce they are able to get, and where exactly it comes from. They really try to get as much local stuff as possible. Definitely recommend if you are in Edmonton!

For frozen produce, Safeway has a line of “O” Organics that includes things like organic green peas and organic frozen corn.  If you want to go for a really big bag, I have found frozen organic corn at Costco (Sunshine Harvest brand, $7.39 for a 2.5kg bag – I believe there are frozen green peas and mixed veggies too), as well as frozen blueberries and mixed berries. Superstore also has a line of PC Organics, and I like to get their mixed and various frozen berries, as well as green peas. I find the Superstore frozen berries to be the best price for organic, unless you get the really big bags at Costco.

Going organic for produce is definitely possible on a budget, especially if you know where to look. And if you do your best to get the worst pesticide offenders organic, that’s one less serving of chemicals you are giving your family. Every little bit counts!

Where do you get organic produce?

(Disclosure: No compensation was received for this post. The opinions expressed are purely my own.)