The World Health Organization recently determined that cell phone radiation is “possibly carcinogenic to humans”. So what can we do about it? Well, we can start by looking into EMF Protection strategies like always holding our cellphones away from our ears and not keeping them next to our beds when we sleep. 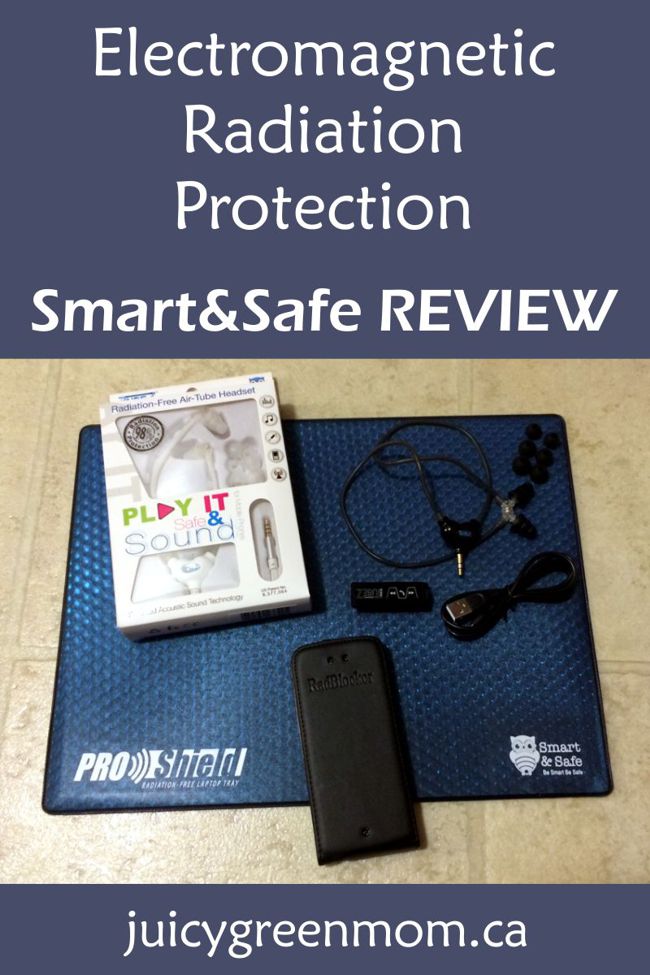 Smart&Safe was founded by someone who lost a family member to brain cancer. He decided to start making products that he felt could make a difference in preventing health problems associated with electromagnetic radiation. Here’s what Smart&Safe had to say about their products.

1. Can you briefly define the differences between the terms “Extremely Low Frequency (ELF)” and “Radio Frequency (RF)” and “Electromagnetic Radiation (EMR)”?

ELF (extreme low frequency) refers to an electromagnetic field generated by electricity with frequencies from 3 to 30 Hz. ELF can be found in nature as well. A laptop that has a battery and charger emits ELF.

Radio frequency (RF) refers to any of the electromagnetic wave frequencies that lie in the range extending from around 3 kHz to 300 GHz, which include those frequencies used for communications or radar signals. They can be produced by Wi-Fi, cellphones and cellular antennas. EMR (Electromagnetic Radiation) is another term for RF.

Our Bluetooth headsets are shielded from the Bluetooth signal and provide the same amount of protection against EMR (98%) as our regular air tube headsets.

Our laptop tray (ProShield) blocks both RF and ELF. Laptops have stronger batteries so the ELF emitted is very strong. Also the Wi-Fi signal is a source of danger especially if you place the laptop near reproductive organs. The laptop tray works with a mirror effect reflecting ELF/RF signals up and away from vital organs.

Our MommySafe Maternity belly band is for pregnant women and blocks RF radiation from laptops and cellphones from reaching unborn babies.

Our RadBlocker Series includes belt pouches that block RF by reflecting the signal of the cellphone away from the body while buffering between you and the cellphone.

3. What is your best advice to people who are concerned about protecting themselves and their children from wireless radiation?

Advice: Do not sleep next to Wi-Fi routers at home. Do not sleep next to your cellphone; if you do, turn it to airplane mode. Invest in an EMF Meter if you can; for our overseas friends consider looking at the UK Stockist Here, and for the US-based readers, look up your local provider. Finding the heaviest sources in your house will help you reduce the EMF’s presence. These days children have cellphones, tablets and laptops from a very early age. They are exposed to RF/ELF around the clock from an early age, so preventative action should be in every parent’s interest.

That’s pretty much what I have been finding about wireless radiation from my previous post. Smart&Safe sent me some of their products to try out so my husband and I gave them a whirl. Here’s what we thought.

Environmental Working Group states: “some scientists report that the wire of a corded headset can act as a secondary antenna, transmitting some small amount of radiation toward the head of a user.” This is the reason Smart&Safe’s EchoTubeZ have no metal wire running through them. Here’s what they say about their EchoTubeZ:

“Smart&Safe have radiation free headsets that have no metal conductor therefore they do not lead any electromagnetic fields (radiation) to the head. The headsets distance the radiation from the head (brain and ear canal) by 98%. The head is much more vulnerable than any other part of the body to RF. The sounds travels acoustically through hollow tubes like a doctors stethoscope.”

The nice perks of these headsets is that they come with multiple sets of earbuds so you can make sure they fit your ears properly, and the earbuds are also magnetic, so you can keep them easily around your neck if you like.

My husband is the one that often carries his phone in his pocket, so he tried out the RadBlocker Flip Case on his iPhone 5S. The case is supposed to “help block up to 60% of cellular radiation”. It’s important to note that “the front of the RadBlocker is protected, the back is not. Radiation must have the ability to exit the back of the case while still buffering between you and your phone.” So you do need to think about which way you are placing your phone in your pocket when using the case.

In terms of function, my husband liked the case – the phone fit securely into it, but was easy enough to take out if he needed to. The case itself was sturdy and added some protection in the event the phone was dropped.

Does it work to block radiation so that you are safe to carry your phone in your pocket? My honest answer to this is – I don’t know. From the video demonstrations I’ve seen, it seems to block some radiation. I don’t have an EMF meter myself so I couldn’t test it on my own. The question of whether the case reduces the radiation to a sufficient degree is up in the air. I think some protection is better than no protection, so I’ll likely keep getting my husband to use it, but I still think distance is probably the best solution (which is why I never carry my phone in my pocket!). We’ll give the case a rating of 4/5.

This laptop tray is for use under a laptop or a tablet that you might be using on your lap or a desk. It is designed to block both ELF and RF emissions, so that your body is protected from them. Smart&Safe has a video that demonstrates how it works with a trifield meter and an electrosmog meter.

The tray is 14″ x 10.5″, which I found to be a good size for a variety of laptops. It’s very sturdy and easy to wipe off if you get anything on it. My husband and I very rarely use laptops on our laps, so we used it underneath the laptop when it was placed on a table (I have read that it should not be assumed that the material of a desk can buffer radiation). I did also try it on my lap with an iPad, which was quite a bit smaller than the tray, but it served as a nice surface for it.

Again, I can’t say for sure how much radiation the laptop tray is blocking because I don’t have the equipment necessary to measure it. However I believe from seeing the video demonstrations that it IS blocking some radiation, which is certainly a step in the right direction. I would give this laptop tray a rating of 4.5/5.

What do you think about electromagnetic radiation protection?

(Disclosure: I received the products discussed in this post at no cost in order to facilitate the review. I am also an affiliate for Smart&Safe. All opinions expressed are my own; and I take great care to be honest and forthcoming in my reviews.)