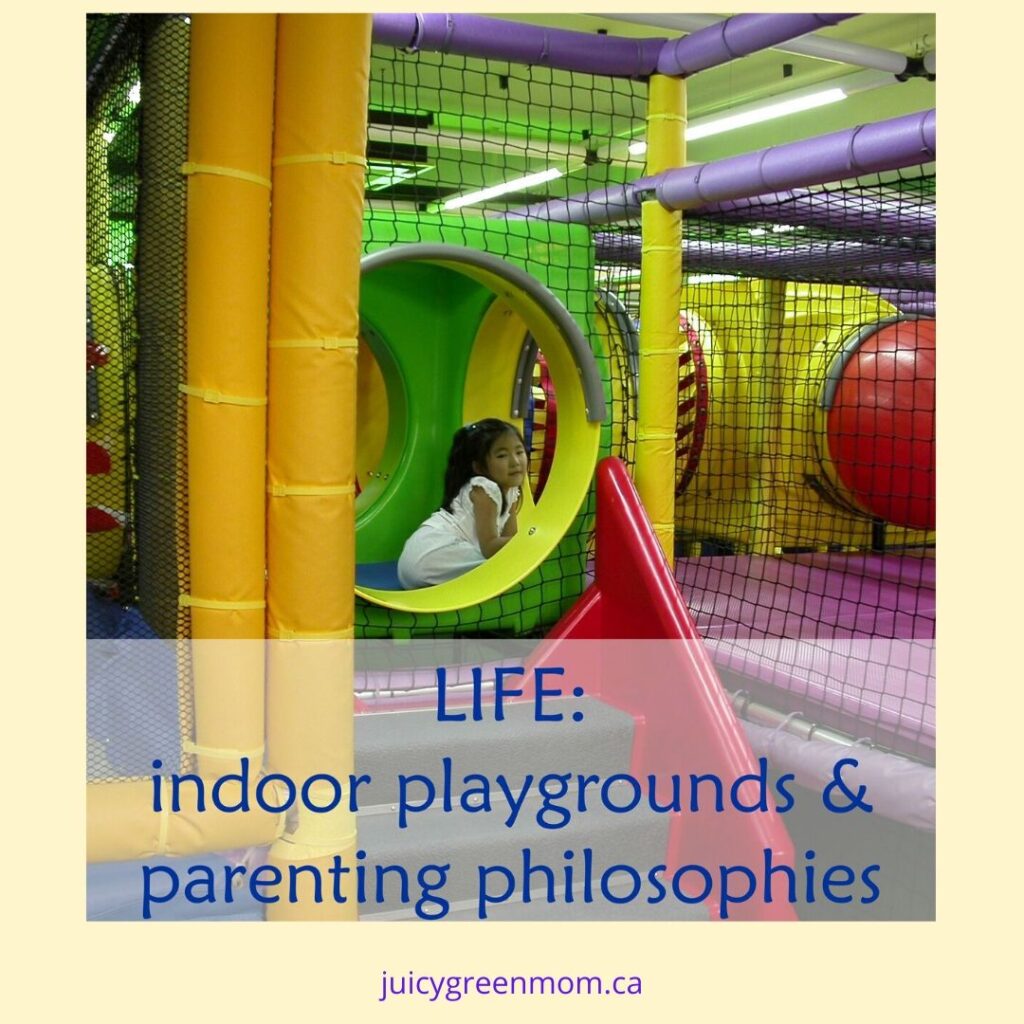 The reality of living in a city where it is a cold winter for almost half the year is that you can’t do a lot of outdoor playground time in the winter months. For a toddler, this can be quite problematic. So, of course there are various indoor playgrounds nowadays, with the advantages of being able to stay warm inside, having bathroom/bum-changing facilities easy accessible, and sometimes food is around too. However, there are challenges with these places as well.

Number one is germs.

I know that I am definitely more germophobic than the average person, and I think it has a lot to do with the fact that I work in healthcare. But even with my handy dandy hand sanitizer that is ALWAYS in my diaper bag, and pulled out several times while at an indoor playground, the germs are unavoidable. I know that some places claim to do a lot of cleaning of their equipment and so on – but I have never actually witnessed this. Last year my daughter was super super sick after going to a place with a ball pit. Ball pit = a ton of fun for a toddler, but can it ever be cleaned?? You just need one kid to sneeze in it and it’s all over. Blech.

Perhaps this will change as my kid becomes one of the bigger kids instead of one of the smaller kids, but I find it very challenging when the bigger kids start to bully and push my kid around. She has been shoved in the face by another older child, and when I intervened and asked this child where her mother was, she of course did not respond (probably because I just told her it was not okay to push other people). I looked around and did not see anyone around who seemed to be looking after this child. For the entire stay at this playground, I never did see this child with an adult. Yes, I understand your child is older and does not need to be followed around the playground. But I believe a certain amount of supervision is still necessary. There are a lot of teaching opportunities in an environment like an indoor playground – like teaching your kid not to push other kids, for example.

This of course gets into the messy world of parenting philosophies. On the continuum, I know that I am definitely a much more hands-on, anxious and child-focused mother. I don’t often let my child out of my sight. If another child is interacting with her, I’m beside her to ensure that she is not grabbing from the other child. In an indoor playground, I’m close by to remind her of the rules of a playground, like taking turns and not climbing slides. I adapt my outings to accommodate for naptimes, mealtimes, and fun stuff for her. Obviously my philosophy is not the only one out there, and it’s not right for everyone, but it works for us.

It’s just tough to know what to do when you’re with kids whose parents are on the opposite side of the spectrum.

For example, we were in a toy store once with a nice play area with 2 train tables and a dollhouse. I was standing on the side watching my child play. Another boy came into the area and looked to be a bit younger than my daughter, and he walked up to her and grabbed a train out of her hand. I looked around for a parent – no one in sight. Of course being where I am on the continuum, I intervened and told him it was not okay to take toys from other kids, and that there were lots of trains to share. We were in that store for probably another 20 minutes, and in this time I did not let my daughter out of my sight, and also never saw a parent approach this little boy. He was left on his own in the play area with no supervision, and he was most likely younger than 2 years old. I don’t know – am I the only one who thinks it’s not okay to just leave your young toddler and assume they’ll be okay? Maybe I’m just too paranoid. Anyways. This is starting to turn more into a rant than a post about life, so I should stop here.

What are your parenting philosophies?