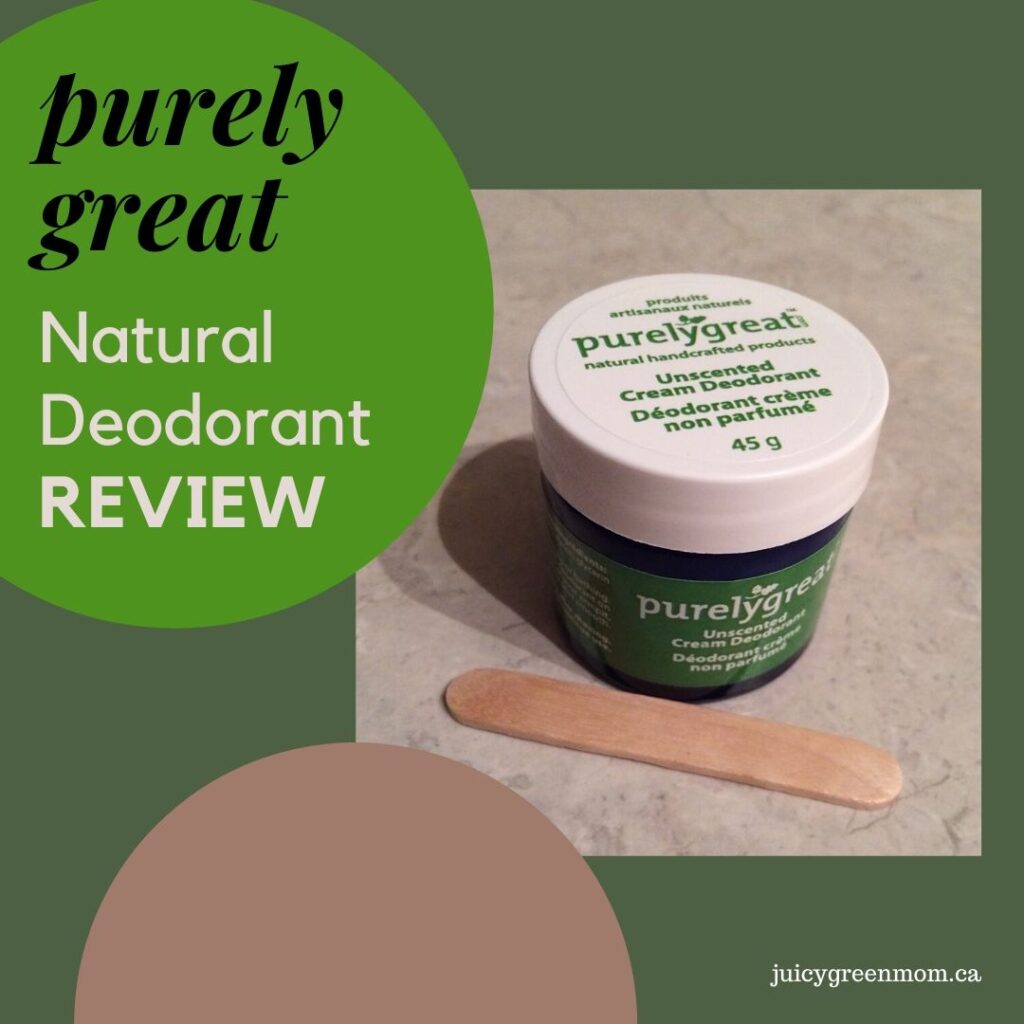 There was a lot of controversy around anti-perspirants vs deodorants for awhile, with scary notions that anti-perspirant use was linked to breast cancer. While it may not be as simple as that, the vast majority of anti-perspirants and deodorants on the market are full of nasty chemicals and toxins that really shouldn’t be getting into our bodies.

Aluminum is the main ingredient in anti-perspirants, which may be a risk factor for breast cancer and Alzheimer’s Disease (it’s unclear whether there is a causal effect, but I like to err on the side of caution!). And parabens that are commonly found in anti-perspirants and deodorants are linked to breast cancer because of their estrogen-mimicking effects.

If you’re like me and would rather just steer clear of possible risks while waiting for more clear research results – natural deodorant is the way to go. So! Here is a Purely Great natural deodorant review to give you a sense of what’s available!

I received a jar of Purely Great‘s Unscented Cream Deodorant. I like to use unscented products whenever possible because of skin and smell sensitivities, so I was interested to see how an unscented deodorant would work!

The cream deodorant can separate, so I followed the instructions to stir it up if I saw liquid pooling on the top. I dabbed my index finger into the cream to cover about the size of a dime on my fingertip, then rubbed it down the center of my armpit. It’s true that it feels a bit odd to be applying deodorant with my fingers instead of a roll-on, stick, or spray, but it’s certainly nothing I can’t get used to. The cream rubs in easily and absorbs quickly so I don’t need to wait to put a shirt on right away. The best thing is – I really didn’t notice it. There was no sticky, chalky, or other feeling lingering. I put it on and just forgot about it the rest of the day. I never worried about it seeping into my clothes (though if it gets on clothes, it washes out easily because it is water-based). If I had a more active day including a workout, I occasionally noticed that I felt the presence of the deodorant, but it didn’t bother me or get all over my clothes.

**THIS GIVEAWAY IS NOW CLOSED! Congratulations to the winner Lynn M.!**

Have you tried a natural deodorant?

(Purely Great provided me with a sample of their product to write this review. No other compensation was received, and the opinions in this review are entirely my own.)