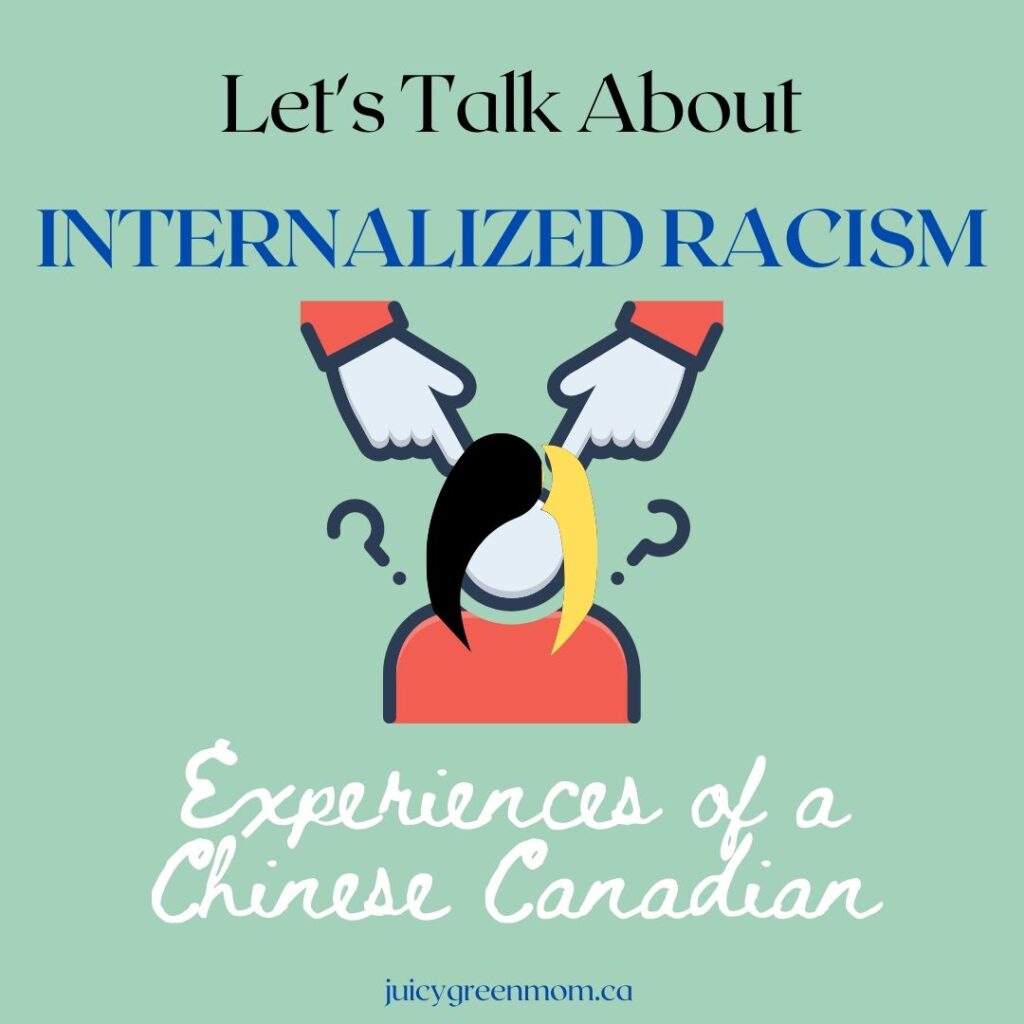 I have spent a lot of time lately reflecting on racism and trying to educate myself. I think I’ve finally figured out that I have “internalized racism”. If you’ve never heard the term before, don’t worry – I hadn’t either!

In a society where racial prejudice thrives in politics, communities, institutions and popular culture, it’s difficult for racial minorities to avoid absorbing the racist messages that constantly bombard them. Thus, people of color sometimes adopt a white supremacist mindset that results in self-hatred and hatred of their respective racial group.

Minorities suffering from internalized racism, for example, may loathe the physical characteristics that make them racially distinct such as skin color, hair texture or eye shape. Others may stereotype those from their racial group and refuse to associate with them. And some may outright identify as white.

– Nadra Kareem Nittle, What Is the Definition of Internalized Racism?

In this form of racism, people of color internalize the negative messages spread about minorities and come to loathe themselves for being “different.” They may hate their skin color, hair texture, and other physical features.

Maybe it seems a little extreme. Let me explain.

Growing up as a “CBC” – Canadian Born Chinese

I was born in Canada. My parents were immigrants. My dad, originally from China, met my mom in Taiwan in University and they went to grad school in the US before settling in Canada where my sister and I were born.

Being a first generation Canadian had always been a source of conflict between my parents and me growing up. Only now am I starting to see how much racism and white supremacy have affected my own identity, worldview, and racial consciousness.

In Grade 2, I was 1 of 2 Asian kids in my class. I distinctly remember crying when a white girl made fun of my “flat nose” and told me to go back to China. I retorted that I had never been to China. My teacher was very caring and reassured me that my nose was beautiful. I don’t remember if anything else was said about it. I don’t know if that white girl experienced any consequences. I just remember feeling, as a 7 year old girl, that I was different, and I desperately wanted to belong.

Side note – Having a “flat nose” is a pain if you need to wear glasses (which many Asians do…). Glasses are designed for people with tall nose bridges, so us Asians with nonexistent nose bridges are shit out of luck to find glasses that stay on well. They always sat on my upper cheeks, not my nose. Same for my daughter all these years later. Still, no one designs glasses for different shaped faces?

Another side note – My parents said my flat nose bridge was their fault because they didn’t try to “pinch it higher”. Apparently they often “pinched” the bridge of my older sister’s nose as a baby and a toddler so her bridge was more pronounced than mine. Even they saw our Asian anatomy as somehow “wrong”, something needing to be fixed.

I grew up as a classic Canadian born Chinese kid – my parents spoke to me in Mandarin and I replied in English. I didn’t bother to espouse Chinese culture. I identified as a “banana” – yellow on the outside, white on the inside. The idea that white was better became such a strong fabric of my being, and I didn’t even know it.

When I turned 10, I asked for a Canadian flag to be put on my birthday cake. No My Little Pony or Barbie for me – I was, as my mother said, very patriotic. And I still am, I love Canada. I love being Canadian. I am proud to be Canadian. But somehow, that also carries the undertone of being “not Chinese”.

In Elementary school, I had primarily white friends, and I shied away from the few Asian kids in my grade. It really bothered me that there was a kid who had the same last name as me, and other kids assumed we were related or friends. I actively tried not to be his friend. I think I was afraid to be “less Canadian” if I associated with other Asian kids.

In Junior High, most of my friends were white or brown. My brown friends could empathize with being children of immigrants, but they were safe to be around without appearing to be “too Chinese”.

At that time, my dad changed professions and he and my mom began to work with many new Chinese immigrants to Canada. My mom always told these people that I couldn’t speak Chinese. When she asked me things about “Canadian” culture, she said, “you are a real Canadian, I am not”. On the other hand, she also said I wasn’t a real Chinese. So even though my parents had lived in Canada longer than they did in Taiwan or China, did they not consider themselves “Canadians”? Could one not be both Canadian and Chinese?

Things changed in High School. My high school was very racially divided. There were specific areas of the school you knew were for the black kids, the brown kids, the Asian kids, etc. and the nerdy versions of those. My circle of friends suddenly became predominately Asian (yup, stereotypically nerdy and academically focused). I suppose some maturing came into play as well; I started to embrace more Chinese culture.

But I still held on very tightly to the idea of being “Canadian”. Being “Canadian” to me meant being born in Canada. Although I hung out with Asians, they were primarily Canadian born – I didn’t really associate with kids that had immigrated here. Subconsciously I think doing so would “sully” my Canadian-ness.

My adult life as a Chinese Canadian – if it’s a thing to be both?

Fast forward – I married a Chinese guy who had a similar parent immigrant, born here story. He, however, speaks fluent Cantonese, whereas my Mandarin is barely passable, though I can still understand conversational Mandarin. I always told people he is “more Chinese” than me, and he joked that he married a “white girl”, which I am coming to realize I subconsciously took pride in.

When my daughter was born, we never had explicit conversations about whether we would teach her Mandarin or Cantonese. I obviously couldn’t teach her Mandarin, and my parents didn’t live in the same city as us. But she could learn Cantonese from her dad and my in-laws. Yet my daughter only understands a few phrases in Cantonese and can only say a handful of words. Apparently my own internalized racism influenced the behaviour of my husband and in-laws so they primarily spoke English to her. I remember around the age of 3, she told me she didn’t want her grandmother to speak to her in Chinese, only in English. Even though we watched some Ni Hao Kai Lan, and Little Pim in Mandarin, I had subconsciously passed my values on to her.

When it came time to think about Kindergarten, my husband and I explored a Bilingual Mandarin program and a French Immersion program. (I went through FI myself through Elementary to the end of Junior High.) We ultimately decided on French. I say “we”, but it was more me. One of many reasons I decided against Mandarin was the way it was taught – 1 week in a Mandarin classroom with a Chinese immigrant teacher, then 1 week in an English classroom with a white teacher. As a Speech Language Pathologist, I didn’t think this was optimal for language learning. My other reason was that if it was predominantly Chinese kids in her class, my daughter would be in a “false” representation of what Canada is. And likely there would be lots of immigrant kids who would already be fluent in Mandarin, and my kid would be the outsider. It was then that I started to realize consciously that I was racist against Chinese people. The fact that I didn’t want my daughter to associate with too many Chinese kids. That I as a parent didn’t want to have to make friends with other Chinese parents, some of whom would not have been born here and therefore not truly “Canadian” like I was.

I realized I am racist against my own race.

I never realized until now how incredibly and deeply ingrained it is – in my identity. No, I wasn’t a victim of racial violence per se. But my entire existence here in Canada has been tied to the values of white supremacy. I have felt that I must choose to be either Canadian, or Chinese, I can’t really be both. And I have almost always chosen the “white Canadian” identity.

The fabric of our society has white supremacy so tightly woven in – you can’t necessarily see the thread in the weave, but it is there.

So what now? Well, we all have our own baggage and triggers about our past.

Some of my triggers:

This revelation that I have internalized racism means that I have a new journey ahead of me. I don’t know exactly how, but I know I need to change this part of my identity. I think working towards becoming an antiracist is a good place to start.

I saw this interview Stephen Colbert did (he is one of my all-time favourites) with Ibram X. Kendi, author of How To Be An Antiracist and Antiracist Baby, and it really spoke to me. It gave me hope. I can acknowledge the racism and I can change. I can teach my child to work for a just society.

What gives you hope that we can eradicate racism?