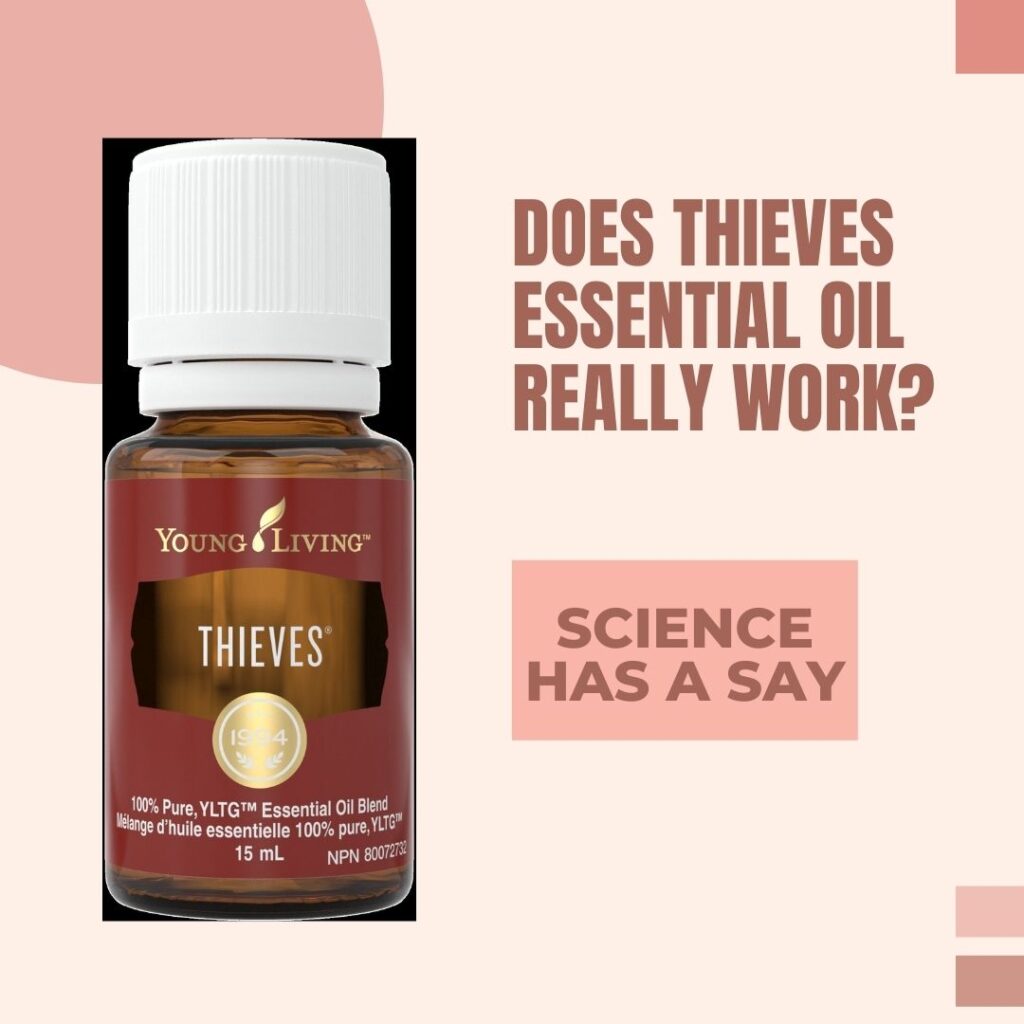 Even if you’re not familiar with the world of essential oils, you may have heard of the famous Thieves blend being used for supporting a healthy immune system. It was actually the reason I first decided to give essential oils a try (because I honestly thought it was hokey, and frankly did not like scents). So – does Thieves essential oil really work? Sound scientific research is very important to me, so I’m going to share what I’ve found.

The Young Living Thieves blend of essential oils (this is why I primarily use Young Living oils) is made up of Clove, Lemon, Cinnamon Bark, Eucalyptus Radiata, and Rosemary. The legend is that 15th century thieves rubbed these oils on themselves during the plague so as not to contract disease while robbing the dead and dying. There are many essential oil companies out there with their own Thieves-type formulations. I want to emphasize that the studies I cite below are about single oils that may be included in a Thieves blend, NOT about a specific company’s blend.

I worked as a researcher in the first 6 years of my Speech-Language Pathologist career in the area of head and neck cancer. This experience has provided me with expertise in interpreting scientific research. I say this because I believe my credentials say something about my ability as a scientist; I’ve seen many “crunchy moms” be dismissed and scoffed at by the scientific community. Well, it’s possible to be a crunchy mom and a scientist. For reals. (If you really want to know, here’s my list of scientific publications in peer-reviewed academic journals.) Ok, enough bragging. Here are some of the studies I looked at:

Deans & Ritchie (1987) looked at 50 different essential oils and their antibacterial properties against 25 types of bacteria. The 10 most inhibitory and comprehensively inhibitory oils included Cinnamon and Clove.

Mayaud et al (2008) looked at 13 essential oils and their effect on 65 bacterial strains with varying sensitivity to antibiotics. Their conclusion was that Cinnamon Bark had the highest antimicrobial activity, especially against resistant strains.

Warnke et al (2009) looked at the effect of several essential oils (Eucalyptus, Tea Tree, Thyme white, Lavender, Lemon, Lemongrass, Cinnamon, Grapefruit, Clove Bud, Sandalwood, Peppermint, Kunzea, and Sage) on antibiotic-resistant strains of bacteria (people get infected often through hospital stays). (I can say for a fact that MRSA which was tested in this study, has been running rampant in our local hospitals for several years.) They found that the strongest oils for inhibiting the bacteria were Thyme white, Lemon, Lemongrass, and Cinnamon. They also found that the other oils also demonstrated considerable efficacy and state that “essential oils represent a cheap and effective antiseptic topical treatment option even for antibiotic-resistant strains as MRSA and antimycotic-resistant Candida species“. (This article comes from a sound peer-reviewed journal I’m familiar with, the Journal of Cranio-Maxillofacial Surgery.) Warnke did another study showing the same results with a focus on Lemongrass, Eucalyptus and Tea Tree oils (2013).

Goni et al (2009) found that vapour generated by a combination of cinnamon and clove essential oils prevented the growth of 4 types of Gram-negative and 4 types of Gram-positive bacteria.

Have you tried any Thieves blends, or DIY your own?

Young Living’s Thieves blend is registered in Canada as a Natural Health Product, shown to help relieve colds and coughs.