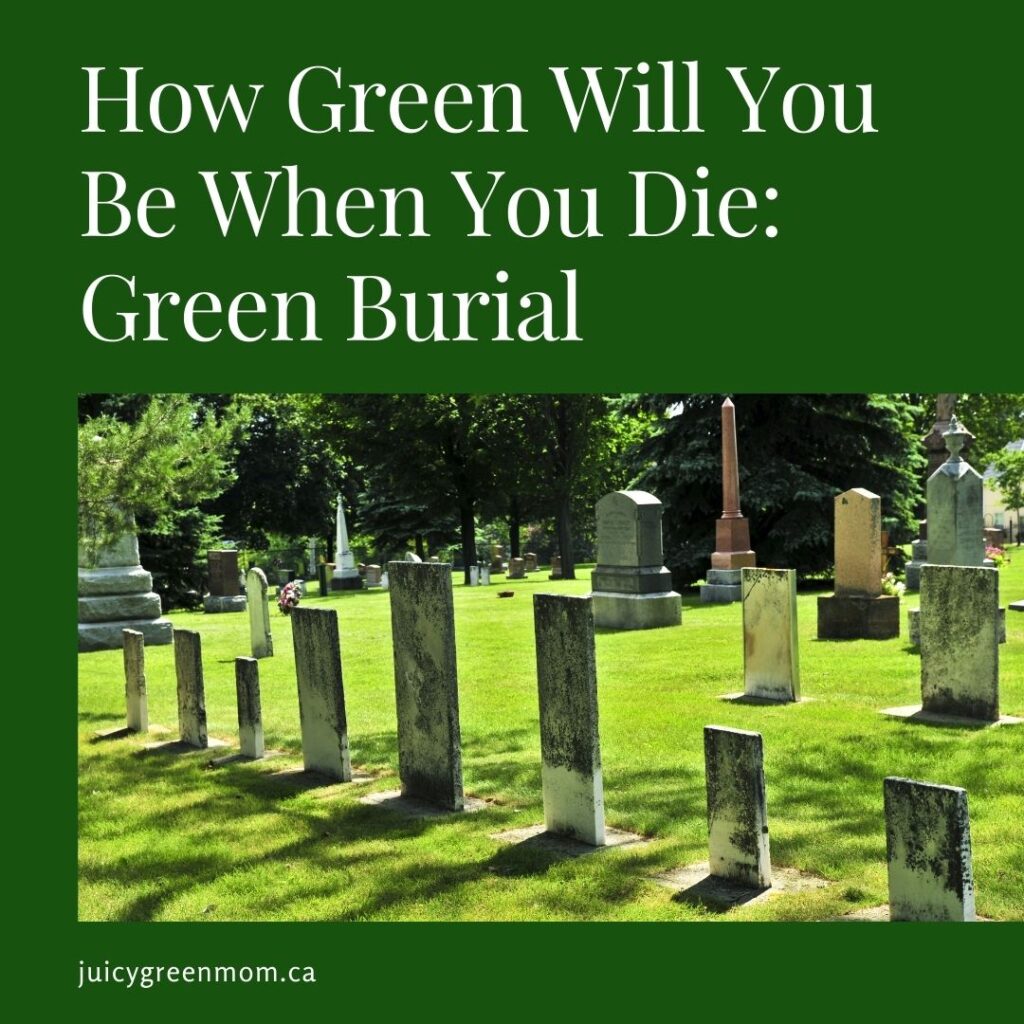 I have to be honest, going green has been something I think about continuing to strive for on my life journey. I never really thought about the impact of my death on the environment. Well, I suppose it might be a little morbid to think about. But maybe it doesn’t have to be!

When you think of funerals, what images come to mind? Usually a large fancy-looking coffin, lots of flowers… Have you ever thought about what happens when that coffin gets put into the ground? It sure doesn’t lead to anything decomposing very quickly. (Remember that House episode where he digs up a body to check something medically?) And the coffins are usually shiny – meaning that some toxic lacquer has been used on it which will now leach into the ground.

And then there’s the “vault” – a large container typically made of concrete, or bronze, steel or plastic, that holds the casket in the ground so that the ground doesn’t sink. The vault not only involves a ton of energy-intensive and polluting processes to create, it also slows down the process of decomposition.

What about embalming, to preserve a body for a funeral? Embalming slows down the natural process of decomposition, and also involves toxic chemicals that then pollute the ecosystem (not to mention the health of the embalmer).

What about cremation? Cremation takes up far fewer resources, however it does involve burning fossil fuels. And mercury and other toxins can also be released into the atmosphere when someone has dental fillings or metal in their body.

Why aren’t cemeteries considered “green”? They’re green lawns, right? If you think about people with super green front lawns, you know a lot of effort goes into them. Usually a TON of watering and mowing, and often pesticides and fertilizers (and yes they’re usually toxic to some degree). And a lawn of just grass – isn’t actually a great environment for a desirable ecosystem without naturally occurring grass, trees, flowers, etc that invite bees and butterflies and other animals in. The fact is that the carbon emissions associated with taking care of a lawn far outweigh the carbon it absorbs.

So what are the alternatives?

I’ve come across 5 green burial options which are a lot more eco-friendly than the standard burial. Do bear in mind that if you have a life or burial insurance policy with a provider like Final Expense Direct to check with them that the burial option you choose is covered by their policy. You don’t want any surprise expenses put on your family if you can avoid it.

Without further ado, these are just a few green options that you could potetially use for your eco-friendly funeral:

Italian designers created “seeds” or burial pods for a deceased human body to be placed in the fetal position. These pods are made from biodegradable material. A tree is then planted above it so that it can draw nutrients from the pod and grow. The tree can be chosen by the living person before they die. And then – instead of a cemetery of cold tombstones, you will have a forest. And each lost life will be giving new life to the tree that family and friends can still visit and pay tribute to. I really love this concept – it is so beautiful in so many ways!

The purpose of a “natural” burial is to return the body as naturally as possible to the earth. Rather than embalming or cremating the body, it is buried in a simple casket or shroud. It is buried in a protected green space, rather than a cemetery. This means that overall, there is less energy and resource consumption involved, and less toxins as well. Currently there are 4 sites for natural burials: in Victoria, BC, Cobourg, ON, Brampton, ON, and Pickering, ON.

This council provides Green Burial Council certification for cemeteries, so that consumers will be able to identify that green burials operate with a different set of standards. Only non-toxic and biodegradable materials are used. The GBC has given a seal of approval to an embalming fluid made entirely of essential oils, which is much different than the usual formaldehyde-laden embalming fluid. This Huffington Post video was what first caught my attention about this issue – it was put together by the GBC.

This charity provides free advice on all aspects of dying, bereavement and consumer rights, and also runs the Association of Natural Burial Grounds. You can look up cemeteries in your area that are members of the Association.

This association and charity in Australia provides information about options for natural burial, and legal rights associated with death and dying.

6 – A Will for the Woods Documentary

A neat documentary called A Will for the Woods has also been breaking ground lately. It chronicles how a man prepares for his own green burial, determined that his last act will be a gift to the planet. Cool, right? Their resources page also has some really in-depth information about the topic, and I got lots of the nuggets of info in this post from their resources.

So, how green will you be when you die? 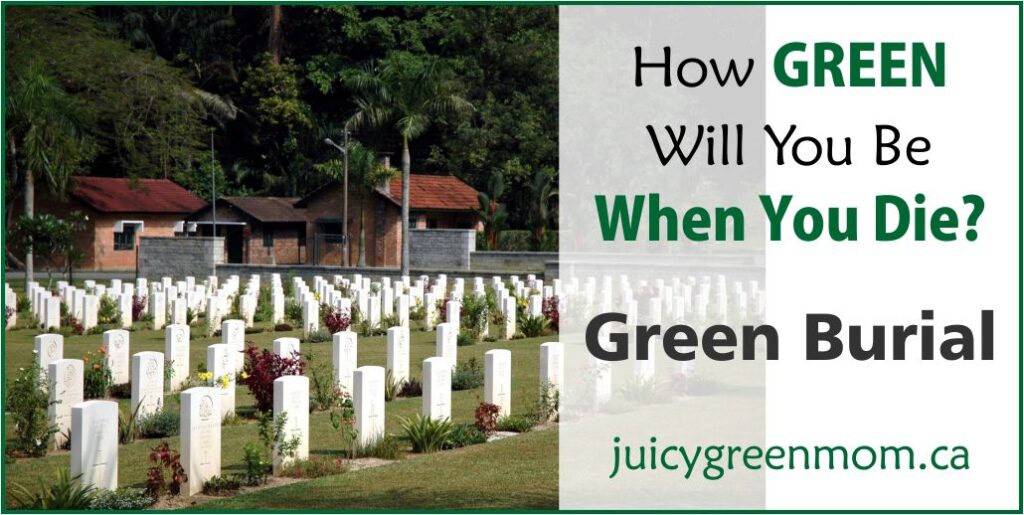 (Disclosure: No compensation was received for this post. All opinions are my own.)