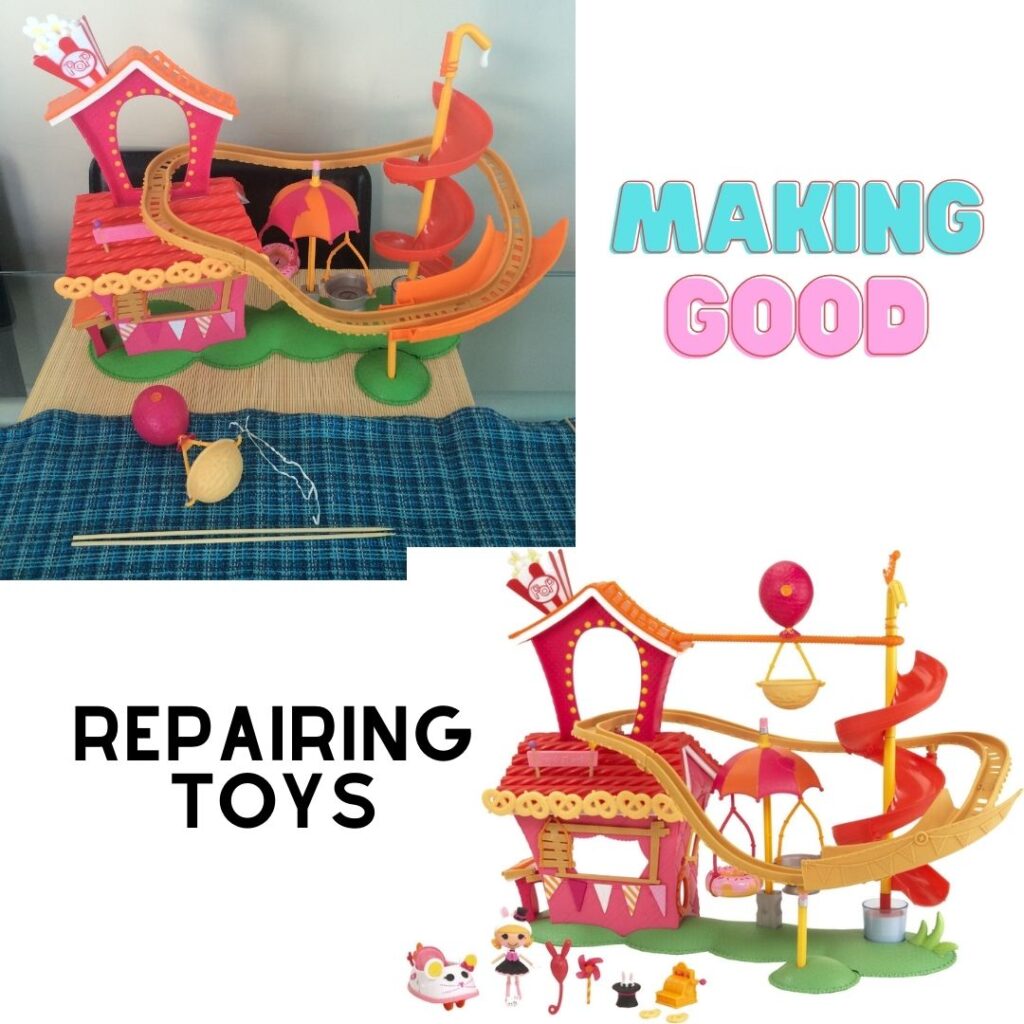 It’s time for some repairing to get done on the “Making Good” blog train! I’ll admit that sometimes I succumb to laziness and don’t repair all the things I can before letting something go (hopefully recycling it if possible!). Repair is a great “R” to add to the list of “R”s for the earth – to keep something out of the landfill and save you from having to replace it!

My daughter hit the Lalaloopsy craze and a lot of the toys are no longer available new (plus it makes me feel so guilty to buy tons of toys new with all that nasty packaging) – so I was thrilled when I found someone on my local swap page who had the Mini Lalaloopsy Silly Funhouse to sell for cheap! Only problem with it was a part that had broken off. The little tracks for the hot air balloon had broken off and I decided I could repair it. If it was just for decoration (you may notice that the little flag on top had also broken off but I didn’t bother with that) I probably wouldn’t have made an effort to try to repair it, but the little hot air balloon ride was such a cute feature that I wanted to give it a go.

At first I thought maybe some thick wire, like floral wire, might do the trick, but it was too bendy. I thought about using some kind of bungee cord but that was too thick to be able to fit around the little (nubbins) where it needed to go. I needed something rigid that would fit into the sides of the balloon so that it would stay in place and just slide across as opposed to moving out completely from the track. Finally I had a brainwave – wooden skewer sticks!

This little repair made me so happy because it used things I already had sitting in a drawer, and it made the toy more functional and fun for my daughter. With some rougher play, it has come apart, but it is easy enough to put back so I’m pretty satisfied with it!

This post is part of a blog train hosted by Agatha from Green Issues by Agy on “Making Good”.

What is repair, and why do we even bother to repair the things we have? Some see repair as a way of reconnecting with our possessions as we extend their lives. Others see it as a form of creative potential and an avenue to express their craft. The rewards for mending varies from feeling immense satisfaction to prolonging the life of the product. Follow the “Making Good” blog train this month and see what we have repaired and reconnected with.

Have you mended anything today?